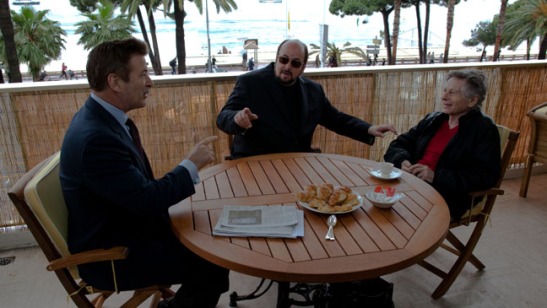 You may have heard about the 99%. Well, in Seduced & Abandoned, Toback and Baldwin (he of James and he of Alec) offer a rip-roaring ride through the concept of the 95%. Based on Orson Welles’ rueful quote, “I look back on my life and it’s 95% running around trying to raise money to make movies and 5% actually making them”, this is a timely look at the machinations of the film industry. How do you get a film made? Is the ‘idea’ king? Should it be? Or does the reliance on money scupper and corrupt? As Bob Dylan once stated, money doesn’t talk. It swears.

The Cannes film festival is the chaotic host for the escapades of Baldwin and Toback as they attempt to raise money for their Last Tango In Paris indebted remake, Last Tango In Tikrit. From the off, the natural chemistry shared by the duo is wonderfully apparent. Alec Baldwin, in particular, is a sharp and witty presence. He is also, hereto, a Cannes virgin. James Toback is a veteran of the festival. Following their trek in and around this world is a joy to behold.

The roll call of participatory players in Seduced & Abandoned also makes for awe-inducing reading. Martin Scorsese, Francis Ford Coppola, Bernardo Bertolucci, James Caan, Ryan Gosling, Jessica Chastain, Roman Polanski and many more offer illuminating testimony to the mechanics of the industry. Scorsese, Coppola and Gosling, in particular, compel with their insights. They provide weight to an understanding that art and commerce are to be eternally betrothed like a squabbling and bickering couple. Ill-suited and unhappy bed fellows, they have no prospect of divorce. Instead, they are reliant upon contemptuous compromise. Without art, commerce suffers and without commerce, art is stifled. As a contributor attests, there is more reward in making a bad film that is seen than making an exceptional one that plays to an empty room.

There would be fair argument to say that the directors in Seduced & Abandoned are portrayed as film martyrs, sacrificing their time and energy perpetually battling with the cruel key holders of power. This might be a little too convenient. Lest we forget, for every Scorsese or Coppola, there is a Michael Bay or Roland Emmerich – eager purveyors of vacuous coin-counting entertainment. Also, early on, the aesthetic of this film offers a worryingly counter-intuitive superficial glint. The initial stages are presented as though this were a Bauer-less episode of 24, with shots splitting into fragments, all vying for the viewer’s attention. It is an unnecessarily dizzying opening. As matters pare down to the essential bones of the content, things calm down. It improves as a result. Once this occurs, in terms of visualisation and tone, its most obvious relation would be Woody Allen: A Documentary (2012).

Ultimately, a documentary as potentially damning as this has no right to be so relentlessly entertaining. This is a surprisingly hilarious and unique peek behind the veiled curtain. Somehow, the tightrope walk of pessimism, respect, optimism and irreverence has been skilfully traversed. There is an agenda here, but this is perhaps a necessary balance. After all, the studios get their airing in the final product that hits the cinemas listings or DVD racks week after week. Baldwin and Toback are a great team (MoreCannes & Wise, maybe?) and in time should consider following this one up. Will Last Tango In Tikrit emerge in any form? Will the industry free itself from the shackles of money? Like an old fashioned matinee screening, this one beckons a closing frame stating, ‘To Be Continued’. It would make for fascinating viewing. As it stands, this breezy documentary demands both time and attention.

You can find the trailer for Seduced and Abandoned here: